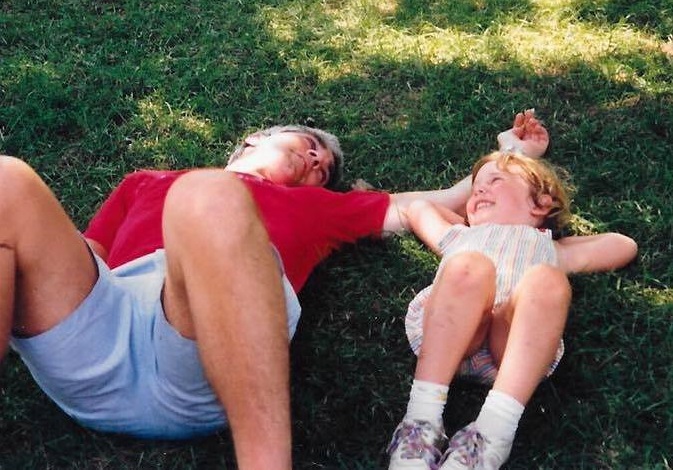 My dad, Tom "Robot" Barry was a genius in my eyes. He was my rock and best friend. He probably wasn't the best father, (letting us eat whatever we wanted, no real rules or curfews until I stayed out too late, once and only once) but he was a great dad. He was the smartest in the room, and he knew it, so could come across arrogant at times, but he was also quick-witted and clever, and man did he love my brother and myself. He would have done anything for us. I could talk to him about anything, and very often, did.
He loved technology and computers and whatnot, helping build the software company "Compuware" from the ground up, and for the majority of my life, worked from home on one project or another from the comfort of his favorite "Archie Bunker" armchair, which didn't actually look anything like the one from the show, but I didn't learn this until after he'd gone. One of my favorite memories was when I would occasionally come downstairs well after I was supposed to be in bed, because I couldn't sleep, find him in that chair, where he always was, working on something with his wireless keyboard well before Bluetooth existed, which he would quietly set aside, stop whatever it was that he was working on, and we would just talk for hours about who knows what. He would get up once or twice to refill his coffee, which he chain drank all day and night. Sometimes he would get up at 3 in the morning, have a cup of fully caffeinated coffee, smoke a cigarette or two, as he was a 3 packs a day guy, and go right back to sleep. When he was admitted to the hospital initially, they ran his chest x-ray twice as they just couldn't believe how clean his lungs were after having been such a heavy smoker for almost 50 years.
When I learned October 2nd, 2010 that he had a fatal Glioblastoma and was given only a month to live, my world collapsed. He lasted another 5 1/2 months, but deteriorated from the smartest man I'd ever known, into a confused, angry, zombie.
That was the hardest thing I've ever been through, but it made me a stronger person, and I believe he is in a better place now, in his lawn chair on the beach, with his coffee and cigarettes; pain and cancer free, and I will see him again, some day. I walk in his honor.