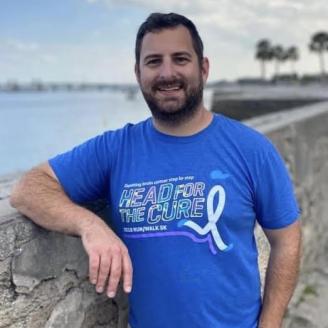 In late 2012, after experiencing headaches and “funny feelings”, which were later determined to be seizures, Paul went to the doctor where they discovered a mango sized brain tumor. He went to San Francisco in early 2013, where he had his first craniotomy, and was diagnosed with a grade 3 Anaplastic Astrocytoma. He then had extensive PT, OT and speech therapy, 6 weeks of radiation, and one year of chemotherapy. But despite the challenges that Paul faced, he always kept a positive attitude and worked hard every day to be independent. Paul then went 7 years of being cancer free. During those years, he continued to get monitored by his doctors at the Mayo Clinic in Jacksonville, and continued to have clear scans. He started a family with his wife Angela and he is now a stay at home Dad to his two children Henry, age 8, and Avery age 5. But in early 2020, it was discovered that a small tumor had regrown. In June 2020, Paul had his second craniotomy. His tumor remained a grade 3 Anaplastic Astrocytoma. He again had a difficult recovery, which included a one month hospitalization, 2 weeks of inpatient therapy, followed by outpatient PT, OT, speech, and another year of chemo. Since then he has continued to have side effects of aphasia due to a stroke he had during surgery. Currently Paul also manages his seizures through medication, but had an increase in episodes in late 2021 possibly due to a "spot" that has appeared. He has been put back onto chemotherapy to fight off the "spot". He has had to navigate this new way of life, and works hard to be where he is today in his recovery. Every day Paul takes a step forward into a future that is not promised. He breathes hope into our family daily. He is the best father and husband, and he is an inspiration to many. He has participated with Head for the Cure since 2013, and loves being apart of a community that promotes awareness and raises funds to help fund a cure. Despite life's ups and downs, Paul remains hopeful.